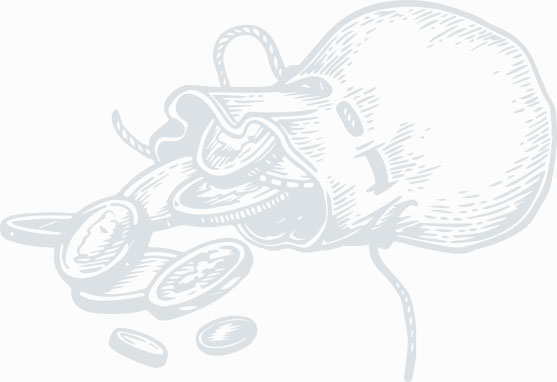 The natural history collection comprises specimens of animals, birds and insects which have been preserved and mounted, either individually or as part of larger collections. It is a fine demonstration of the Victorian obsession with the natural world. Many of the specimens would have taken pride of place in their collectors’ homes but many were also specifically acquired by the Society for subsequent display in the museum.

This sounds barbaric to our modern ears but it must be remembered that this activity was occurring at a time when bird-watching aids such as binoculars, popular identification guides and high-quality photography were unavailable. Often the only means of identifying and authenticating most vertebrate species was by collecting dead or injured specimens, or from their deliberate killing by means of hunting, shooting, fishing, pest control and game-keeping. These practices are now, thankfully, illegal. However, we have been left a legacy that provides and encourages understanding of the natural world as a whole and some truly beautiful specimens, many of which we would never be able to view in their natural habitat.

Visitors should note that the birds’ egg collection is available to view by appointment. A new arrangement in one of the larger cases will include several specimens of smaller birds which have been in storage for some time. Our collection of moths and butterflies is newly displayed, too.

Included in this collection

Many of the birds in the collection are representative of species that occur in the area although some are now rare, such as the Turtle Dove and the Bittern, and some even extinct as breeding species, such as the Red-backed Shrike (soon to be put back on display). Raptors and Owls are well represented, as are Seabirds, Waders, Ducks and Geese, and there are a number of traditional glass cases displaying birds of the same family, many of them set up and preserved by local taxidermists, such as J H Wilson of Baxtergate, Whitby. 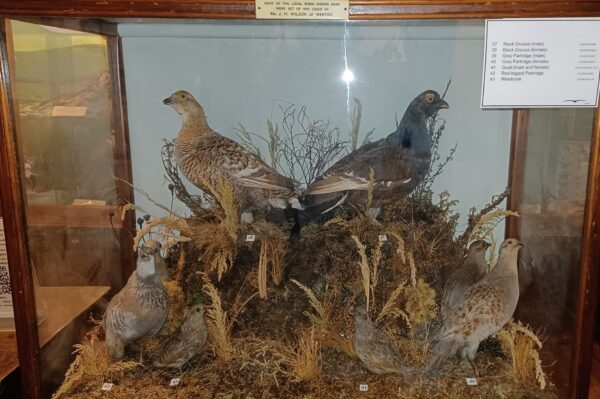 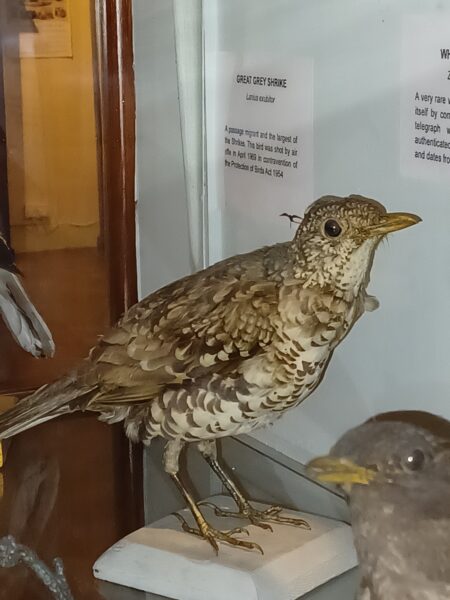 Some notable birds in the collection include the rare White’s Thrush, the first of it’s kind to be recorded in Yorkshire, the now extinct American Passenger Pigeon, a rare and valuable specimen, and the Ivory Gull, which was photographed by F M Sutcliffe shortly before it died.  From a preservation point of view, the Marsh Harrier was preserved and set up by one of the most celebrated taxidermists of the time, Rowland Ward of Piccadilly, London and there are a number of specimens by Stephen E Cook, the long-serving Zoological Preparator at Newcastle’s Hancock Museum. These include a magnificent Hen Harrier, a bird which, in it’s own right, is an icon of the North York Moors. 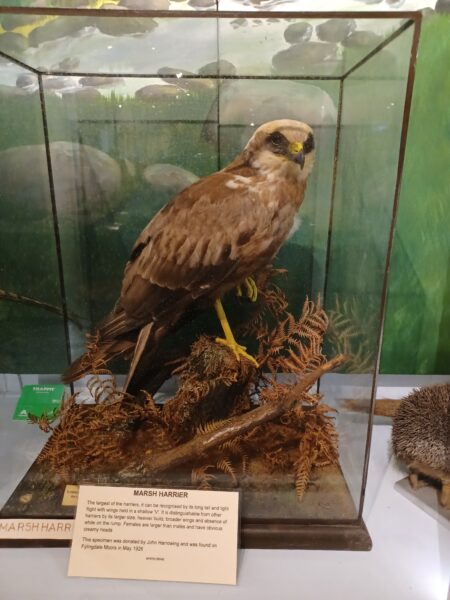 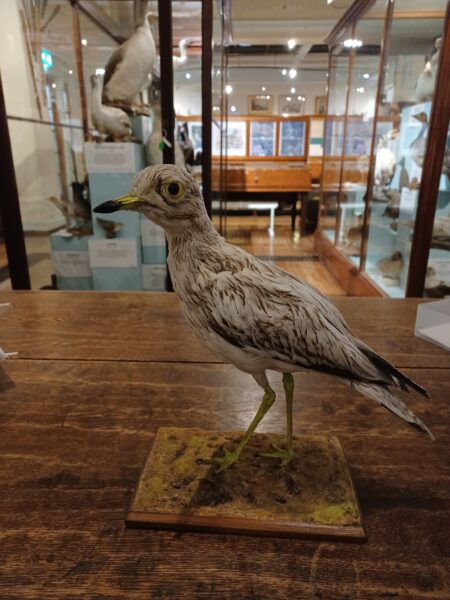 There is an extensive collection of bird’s eggs, some of which are on display, together with a selection of common birds’ nests.  The larger proportion of the egg collection is available to view by appointment and some will be shortly brought back to display as part of a new arrangement in one of the larger cases, which will also include several specimens of smaller birds which have been in storage for some time. 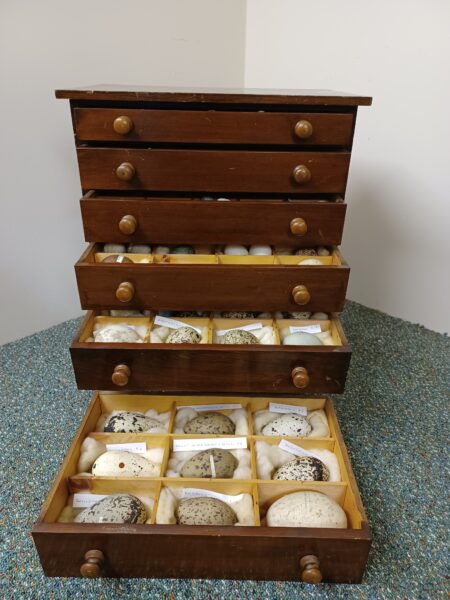 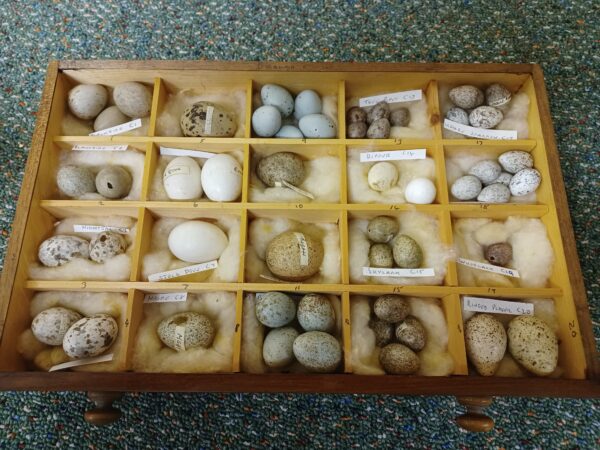 The display allows a close-up view of common UK mammals both those often seen such as the red & grey squirrels, hedgehog, mouse and also some of the smaller mammals which can very occasionally be glimpsed such as the mole, stoat, weasel, polecat, badger, otter and seal. 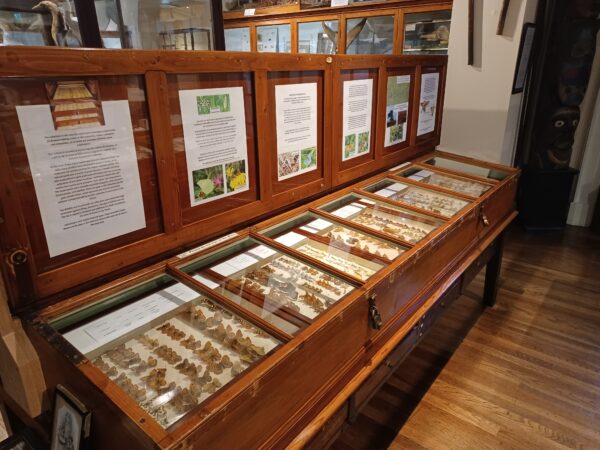 A comprehensive collection of British Lepidoptera has now been put on display, comprising 5 drawers from a mahogany cabinet containing 14 drawers, which was donated by Mr W Lister in 1868. This joins a smaller case of British butterflies already on display.  Both collections include rare and now extinct species and the new display includes examples of chysalides, pupae and larvae as well as some astonishingly well preserved butterflies and moths. The number of drawers in this cabinet will enable them to be changed from time to time, allowing all of the specimens to be on view at some point. 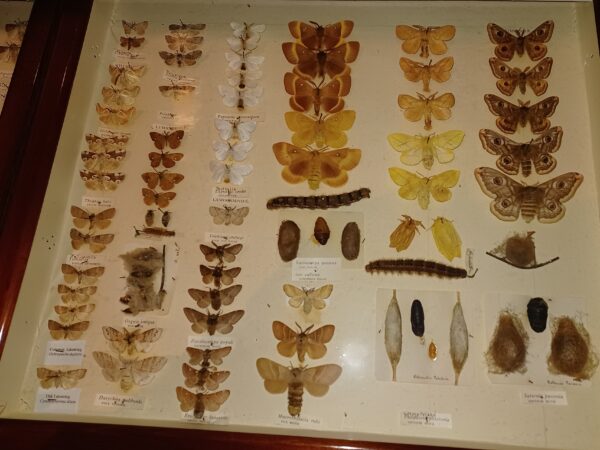 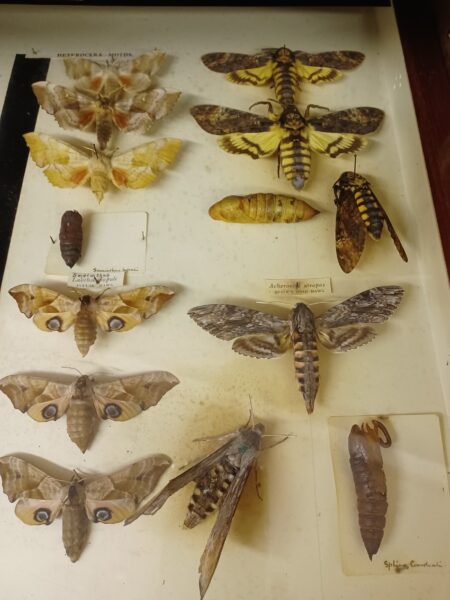 Sea bishop. A mythical fish that appears like a bishop. Example ‘created’ by local fishermen

Two displays cover items found on the rocky and sandy shores. Several fish including chub, taila hirundo and herring are displayed in typical 19th early 20th century small cases in their natural habitat along with the first tunny caught by rod and reel off Whitby in 1932. The collection also includes seahorses and a seabishop, a mythical marine creature ‘created’ by local fishermen. 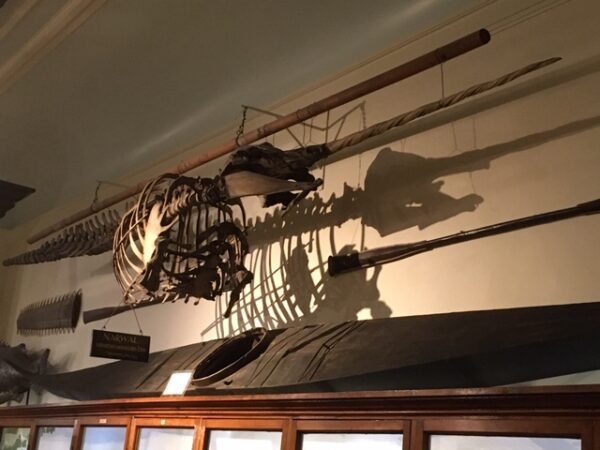 Skeleton of a Narwhal

The most imposing marine exhibit is the complete skeleton of a narwhal mounted high-up on the wall. 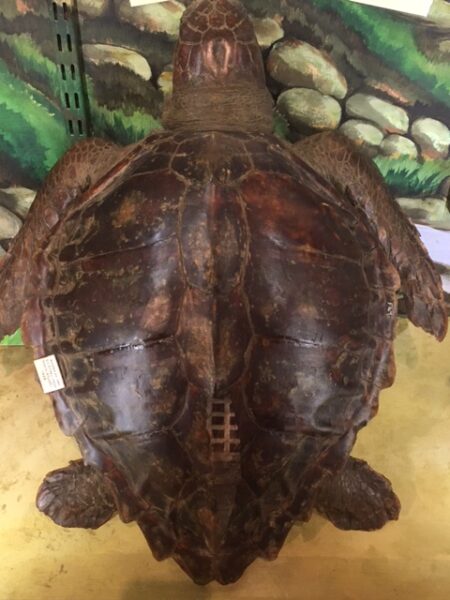 Probably the most fascinating exhibit is a loggerhead turtle along with the story of its ‘capture’ and subsequent history. The Whitby steamship “Ethelfreda” was sailing from Baltimore to Birkenhead when it experienced atrocious weather. An apprentice, Sidney Brown, saw an able-seaman swamped with water and then re-appear carrying a loggerhead turtle in his arms that had been washed aboard. Sidney fancied having a turtle all of his own so found it accommodation in a nearby bath fed with saltwater for the next 2 weeks. On arrival at Birkenhead the Chief Officer ordered the turtle to be sent to ‘Sir John’ despite the Sidney’s protestations. Sidney was given a rail warrant to Whitby, his home port, and a week later saw the turtle, now dead, along with various fish on Eglon’s marble slab. He lost track of it for over 20 years only to re-discover it on show in Whitby Museum!

One of the largest and most hidden collections within Whitby Museum is the herbaria section. There are over 9000 specimens of pressed wild flowers all tucked away in cupboards to preserve their freshness. It was quite a popular hobby during the Victorian age to collect specimens of wild flowers and press them to form a herbaria collection.

Herbarium are arranged into family classifications and tend to contain a specimen from almost all wildflower groups. Several specimens were pressed and the best used in the collection. Each one would be labelled with the common and latin names, the locality found, by whom and the date. Often the status was included i.e. whether naturalised or alien.

One such collection was put together by Canon Robert Fisher, some being his own specimens and many from other herbarium. They are beautifully mounted on loose sheets, stuck down with strips of white paper and tied into bundles with pink ribbon. They are housed in a glazed cabinet with multiple drawers. Due to the care taken in the presentation of the flowers the colour has been preserved. Many of Robert Fisher’s 1300 herbaria were collected from Yorkshire in the mid 1800’s and they were presented to the museum in 1931. Thomas Chapman’s herbaria is presented in a very different way. The flower specimens are stuck down, possibly with egg white onto scrapbook-type paper and bound in leather volumes with toolwork on the spines. This means of display hasn’t kept the colours as fresh and bright but it is still a very comprehensive collection. It was amassed during the early 1800’s and contains over 1600 specimens including several volumes of grasses from Yorkshire. There are also some exotics. 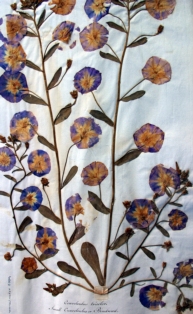 In some cases it was a lifetimes passion to gather a specimen of most classes but in the case of the Percy Burnett herbarium around 2500 specimens were collected in just 3 years during the mid 1930’s. Percy led many walks locally for the Whitby Naturalists Club so was in a good position to encounter various plants from the local area. Because his collecting is so well labelled it forms an important source of information to where flowers can still be found in the Whitby area. The flowers were stuck with paper strips onto loose leaf paper and are stored in multi-drawered cabinets. They are in excellent condition and are well worth viewing.

Many members of the Whitby Naturalists Club had a passion for flowers and the museum’s collection includes many pre-war watercolour paintings of the local flora painted by members.

The most specialist herbarium within the museum is Dr. Robert Braithwaite’s collection of over 2300 mosses, lichens and liverworts. This herbarium, due to the size and nature of the specimens, is probably rarely going to see the light of day. It has been neatly wrapped in various small delicately folded papers, some of which are old letters and sections of intriguing documents. One good gust of wind could finish the collection for good! Some of these specimens are very rare if not extinct. They mainly originate from the Whitby area but many also come from Teesdale and High Force. Robert spent 25 years in his later life meticulously writing and drawing hundreds of detailed illustrations of mosses and lichens in all stages of their cycle e.g. flowering or in fruit, which he published on his 81st birthday. The three volume ‘Moss Flora’ he presented to the Lit. and Phil. library is in such good condition it can barely ever have been opened.

Robert Braithwaite’s interest in flora must have been a large part of his life. His father-in-law Dr Nathaniel Ward invented an enclosed glass case which overcame the problems of transporting live plants from other countries on long sea voyages. This meant that exotic new species could successfully be imported to Botanic gardens by plant hunters. The Wardian case was also used to good advantage as a means of growing ferns as a display in Victorian houses. Nathaniel, his daughter Charlotte and Robert named their house in Clapham ‘The Ferns’ and contemporary books describe how both inside the house and the outside window sills were decorated with ornate fern, alpine and rock gardens.

A small display for the herbaria section can be found near the museum tearoom, which is constructed in the form of a ship’s Wardian case.

Related object of the week