The display allows a close-up view of common UK mammals both those often seen such as the red & grey squirrels, hedgehog, mouse and also some of the smaller mammals which can very occasionally be glimpsed such as the mole, stoat, weasel, polecat, badger, otter and seal.

Quite a number of the cabinet displays have been revamped over the last few years and a new introduction is that of a comprehensive range of British lepidoptera, previously held in storage. Also adding colour is the Baker collection of exotic butterflies from Malaysia and S.America.

Two displays cover items found on the rocky and sandy shores. Several fish including chub, taila hirundo and herring are displayed in typical 19th early 20th century small cases in their natural habitat along with the first tunny caught by rod and reel off Whitby in 1932. The collection also includes seahorses and a seabishop, a mythical marine creature ‘created’ by local fishermen. 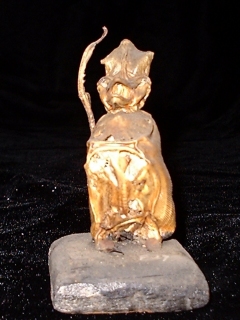 Sea bishop – a mythical fish that appears like a bishop.
Example ‘created’ by local fishermen

The most imposing marine exhibit is the complete skeleton of a narwhal mounted high-up on the wall.

Probably the most fascinating exhibit is a loggerhead turtle along with the story of its ‘capture’ and subsequent history. The Whitby steamship “Ethelfreda” was sailing from Baltimore to Birkenhead when it experienced atrocious weather. An apprentice, Sidney Brown, saw an able-seaman swamped with water and then re-appear carrying a loggerhead turtle in his arms that had been washed aboard. Sidney fancied having a turtle all of his own so found it accommodation in a nearby bath fed with saltwater for the next 2 weeks. On arrival at Birkenhead the Chief Officer ordered the turtle to be sent to ‘Sir John’ despite the Sidney’s protestations. Sidney was given a rail warrant to Whitby, his home port, and a week later saw the turtle, now dead, along with various fish on Eglon’s marble slab. He lost track of it for over 20 years only to re-discover it on show in Whitby Museum!