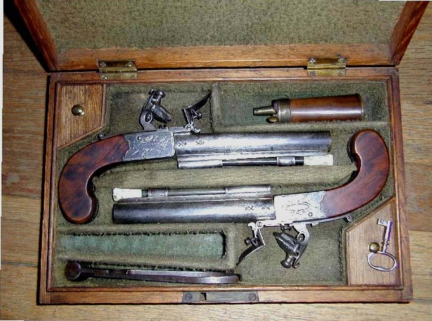 Pair of cased flintlocks by Barber of Newark.
Belonged to Capt. Robert Moorsom

We are fortunate to have many guns etc., with local connections. In particular the fine pair of boxed flintlock pistols by Barber Newark used by Captain Moorsom R.N. aboard ‘The Revenge’ at the Battle of Trafalgar. We also possess a flintlock presented to his son, also Captain Moorsom R.N., by Radama, King of Madagascar. This gun has silver mounts and a red stone on the stock. There is a double-barrelled ppercussion shotgun by Tyson, Whitby that was used by a poacher on 29 January 1844 to shoot Mofat, Lord Normanby’s game keeper at Mulgrave Estate! A pair of ladies muff pistols from The Great Exhibition which are of Belgian manufacture and a pepper box pistol by Wear, Whitby are of particular interest along with various other pistols from the mid 18th century and several blunderbusses.

More unusually there is a line throwing gun made by William Pritchard, Birmingham to the instructions of Professor Murray for saving life at sea by shore to ship rescue. It shot an arrow attached to a line and was purchased by the Whitby Literary & Philosophical Society for use at Whitby.

There are some good Georgian swords with blued and gilt blades. A quite rare cross hilted sword of a private of the 15th regiment of Light Dragoons (Elliotts Dragoons 1764 – 1788). The regiment was raised by George Augustus Elliott 1st Baron Heathfield 1717 – 1790. A rapier with an English japanned hilt ca. 1630 with a Spanish blade. The hilt is unique and was made for someone in mourning. Other items of interest are a Cromwellian Helmet with front and back plates, various flasks, powder magazine, a collection of constables’ staffs (police truncheons) not to mention handcuffs etc.

Several uniforms are on show of the local Volunteers North Riding Battery, Royal Field Artillery along with photographs and other items of interest. From the second World War are some souvenirs collected from the Heinkel shot down on Banniel Flats including a watch name plate and pendant made out of the windscreen. It was the first German plane shot down on British soil by F/O Peter Townsend on 3rd February 1940 flying a Hurricane.